From dramatic mountains blanketed in lush rainforest, through to gorgeous wine valley’s, and pristine white sand beaches, there is something for everyone in New South Wales.

Soak up the sun on one of the many beautiful beaches dotted along the coast, chill out with the laid-back residents of Byron Bay, or take a leisurely drive to Hunter Valley and unwind with a refreshing glass of wine. For the more active visitor, your trip would be incomplete without a hike through the Blue Mountains and the resplendent rainforest that covers these towering peaks.

Culture, history, and nature abound in this multi-faceted, vibrant state. Take an Aboriginal-guided tour to learn more about Aboriginal beliefs and gain a new understanding of the land around you, go skiing in the Australian Alps, or partake in some breath-taking star-gazing in the vast, wide-open expanse of the Outback.

No matter your reason for visiting, NSW is definitely one for the bucket list.

The climate in New South Wales can be described as subtropical oceanic, with warm summers and mild winters.

Summer is generally very pleasant with average daytime highs of 26°C, dropping to a mild 19°C at night. Breezes coming in off the sea can help to keep temperatures comfortable. Strong breezes coming down from the desert can increase temperatures quite significantly; however, they only stick around for a short time. These dry, strong winds can also contribute to the bush fires that occur throughout Australia during the summer season.

Although New South Wales doesn’t have a dedicated ‘dry’ or ‘wet’ season, Autumn is undoubtedly the wettest season of the year, with the highest volume of rain falling in April. You can look forward to average daytime temperatures of 23°C, and nighttime temperatures dropping to 15°C.

Winter continues to bring rain; however, temperatures remain mild, and it never drops below freezing. Expect average temperatures to reach 18°C during the day and 9.5°C at night.

Spring is considered the best time to visit New South Wales due to the mild, sunny, and generally dry climate. Daytime temperatures reach an average of 23°C, dropping to 12°C overnight.

The combination of converging warm and cold waters and a coastline that stretches for just over 2000km, makes for outstanding diving year-round. Explore caves and caverns, reefs, drop-offs, sponge gardens, amphitheatre-shaped cliffs, and spectacular shipwrecks.

The diversity of marine life changes from the warm, tropical waters of Byron Bay, bordering Queensland in the north, to the cooler waters around Sydney and towards Victoria in the south.

Swim with playful fur seals and little penguins on Montague Island, and explore the World Heritage-listed Lord Howe Island with a chance to spot the very rare Ballina Angelfish. Visit the marine protected microcosm of Fly Point Reserve where fishing is banned, and aquatic life thrives in astounding numbers, or choose from over thirty stunning, diverse dive sites scattered throughout Jervis Bay. For some awesome pelagic action head over to Julian Bay Marine Park just off Byron Bay, and if wrecks are more to your liking, head down to Merimbula for an unforgettable experience. If it’s an adventure that you’re after, Fish Rock Cave gets the adrenaline pumping and is sure to impress even the most seasoned diver.

New South Wales has something for every diver at every level and will leave you with experiences and memories that will last a lifetime.

Southerly swells and light wind make for incredible visibility along the NSW coast during the winter months. From May to October, you can spot migrating whales all along the coast. Giant Cuttlefish mating season is from June to August, and the egg-laying season is in September – this is a spectacle not to be missed. For the Port Jackson sharks, mating season is through the summer months of December to February. If you find yourself in the Port Stephens area, your visit would be incomplete without taking a dive to check-out the oldest living seahorse in the world – a White’s Seahorse named Dawn. You can also visit the Seahorse Hotels in the waters of Port Stephens, which are being used as a haven and a new habitat for White’s Seahorses throughout the area.

The convergence of five major currents around this tiny island encourages a magnificent ecosystem supporting an incredible amount of marine life. With a dive season running from September to May, you can spend time in these temperate waters discovering rare corals, multitudes of reef fish and critters, and perhaps you can even spot the rare Ballina Angelfish.

With over sixty dive sites to choose from and a maximum of 400 people allowed on the island at any one time, you will practically have the water all to yourself.

Ball's Pyramid is probably the most famous of all the dive sites available on Lord Howe Island, and rightfully so. Expect to see enormous schools of Violet Sweep, Amberjack, Rainbow Runners, and Ballina Angelfish. Keep an eye out for Marlin, Wahoo, and Dolphins too!

With over 30 dive sites to explore, including reefs, drop-offs, gutters, kelp-forests and sponge gardens, you'll find something for everyone in this beautiful bay located just three hours' drive south of Sydney. With crystal clear waters and visibility averaging 15 - 20 meters throughout the year, you will easily be able to spot the Port Jackson Sharks, Grey Nurse Sharks, Wobbegongs, PJ's, and seals that call this bay home. For the macro lover, nudibranchs, sea spiders, weedy sea dragons, pipefish, and several species of seahorse will capture your attention. Try to spot the rarer Eastern Blue Devil Fish, Spiney Garland, and the Red Indian Fish.

Located on the mid-north coast of NSW, this area is well known for some breathtaking dive sites. Fish Rock Cave is probably the most well-known dive site in the area, renowned for its naturally lit cavern and the vast array of marine life that call this cavern home. Look out for Grey Nurse Sharks, Stingrays, Wobbegongs, Bull Rays, live Cowrie Shells, Spanish Dancers, and Sea Cucumbers. Jellyfish, Sea Turtles, and an abundance of macro life also abound in this area. If you visit during September and October, you might be lucky enough to witness Giant Cuttlefish flashing their iridescent colours around the cavern and laying their eggs. This cave system is a photographer's paradise, so be sure to pack your wide-angle lens! Another dive site to visit is Green Island. This is a critical habitat site of the Grey Nurse Shark and is located just north of Smokey Cape lighthouse. The island is ringed by a rocky reef which supports vast arrays of fish life, turtles, rays, and of course, Grey Nurse Sharks. Black Rock, located south of Smokey Cape lighthouse, is known for its resident turtles who make their homes in the rocky crevices of this dive site. Combine this with gorgeous tropical corals and thousands of schooling baitfish, and you have the recipe for a fantastic dive!

Located 2.5km from Byron Bay, this protected marine park boasts crystal clear waters, where warm and cool currents meet to create a fascinating mix of tropical and cold-water species, all in one place. Spotting dolphins, turtles, sharks, and rays is all in a day's work. A visit during the winter months will bring you up close with Grey Nurse Sharks, presumably visiting the area to breed. If you're planning a trip during spring, Blue Tangs are in abundance, and in summer you will be very likely to spot Leopard Sharks, Manta Rays, and Big-Eye Trevally. Regulars throughout the year include Wobbegongs, Cuttlefish, Eagle Rays, Giant Guitar Fish, Turtles, and the rare Pineapple Fish. From May to September, keep on the lookout for migrating Humpback Whales, which you can easily spot from the dive boat. There is something for every diver at Julian Rocks Marine Park, including six primary dive sites ranging in depth from 6 - 24 meters.

Located half-way between Melbourne and Sydney on the Sapphire Coast are three shipwrecks that provide some spectacular experiences for divers. Ranging in depth from 10 to 26 meters, the SS Empire Gladstone, Tasman Hauler, and Henry Bolte are spellbinding. Among the abundance of marine life swarming around these wrecks, you can spot Blue Grouper, Blackfish, Silver Sweep, Yellowtail, Salmon, Kingfish, Banded Morwong, as well as various species of Leatherjacket and Wrasse. The Sapphire Coast is also known to be visited by sunfish, seals, dolphins, turtles, and migrating humpback whales in winter.

New South Wales is full of hiking and walking trails to suit any fitness level. Climb Mt. Gower on Lord Howe Island for spectacular views across the ocean. Take a stroll along one of the many coastal walking trails scattered throughout the state. Join an Aboriginal cultural tour that will take you on a walk through some extraordinary places full of history and fascinating points of interest. There is something for everyone.

Lord Howe Island is famed for its birdlife, with 208 species of birds being recorded on the island, 32 of which are regular breeders. Menindee Lakes in the Outback, Capertree Valley, Macquarie Marshes, Jervis Bay, the Murray Valley, and many more hotspots throughout NSW will make your bird watching come true!

If it’s luxury you’re after, Hunter’s Valley has the best to offer. World-famous wineries, award-winning restaurants, luxurious accommodation, and heavenly spas await you in this glorious natural setting.

If you’re visiting NSW in winter, be sure to take a road trip from Sydney all the way down to the Australian Alps and go skiing and snowboarding in the Snowy Mountains. You can also take part in snowshoeing, snow tubing, and night skiing where you can show off your skills at one of the many terrain parks in the area. If you visit these mountains in summer, hiking, camping, mountain biking, and horse-riding are a phenomenal way to fill your days and explore the rugged natural beauty surrounding you.

For a magnificent view over deep valley troughs from high mountain lookouts, exhilarating rides on a train with a glass roof through the valley, and exploring the labyrinths of a vast cave shaped by underground rivers, The Blue Mountains are your one-stop-shop. Take part in bushwalks, mountain-biking, bird-watching, and hiking, or explore the rainforest and the many waterfalls in the Blue Mountains National Park. With activities for the whole family, this is sure to be an unforgettable adventure! 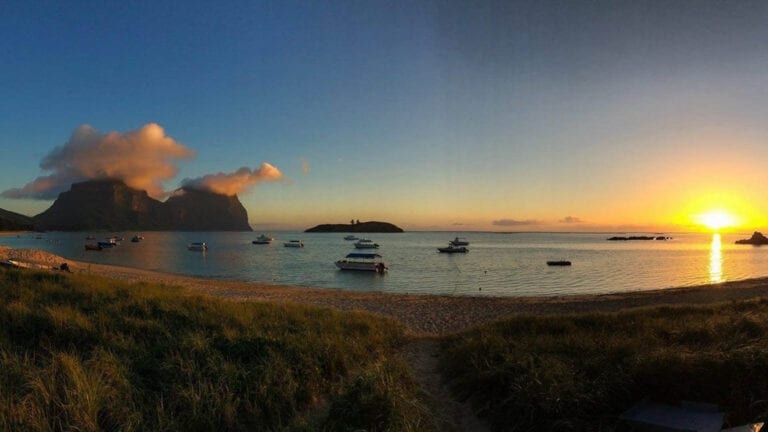